Being a SAHM of an active 22-month-old, I am always looking for new and adventurous things to do with my son. I had seen an article about a year ago about Raven Rock State Park but had forgotten all about it. When I text my husband one morning and said, ‘what should Squish (what we call our son) do today?’ he suggested we go and check out the park. Unfortunately, it was already 930am and getting hot out, so I made plans to go first thing the next morning.

Raven Rock is located about 40 minutes south of Fuquay-Varina in Lillington (Harnett County). It is a straight shot down 401 with a couple right-turns once you get into Lillington. It is an easy drive, past open fields of tobacco and not a lot of traffic or stop lights.

I packed up our RTIC lunch box full of lunch meat, cheese, berries, chips and plenty of water. I also made sure to bring my sons BOB stroller, since I knew the tires would perform better on rough terrain and his portable fan. We strapped on our sneakers, loaded up the car and went on our way. When I put the address into ‘Maps’ on my iPhone it must have known my son likes bumpy roads because once we got into Lillington it took us down this really long dirt road. At one point there was a huge dip in the road with a small stream running through it that I honestly was not sure my truck was going to make it over it without scraping up my front bumper guard since it was such an extreme angle. Thankfully, we made it without any scrapes or bruises.

Note: there are actual paved roads that you can take to get to the park entrance. Apparently, my phone just wanted me to take the shortest possible route which is why I ended up on a dirt road. There are houses off said dirt road, but I did choose the alternate route on my way home.

I checked out the park map once we parked and unloaded. I decided on the Raven Rock Loop as it was only about 2.6 miles and marked as easy. I was soon going to find out that ‘easy’ did not mean stroller friendly. I threw on my backpack, put our lunch in the stroller, strapped my son in and started our hike. We had seen a few other groups of people leave before us on the same trail, but it was so quiet and peaceful. You couldn’t hear anything but the birds and various squirrels moving about.

There are wood steps recessed into the hillside throughout the trail. They weren’t unmanageable but it definitely made our hike a bit more challenging. The trail was also littered with giant tree roots that we had to maneuver over and around. My son was a trooper and wanted to walk himself, which was great for capturing a few silly photos of him. 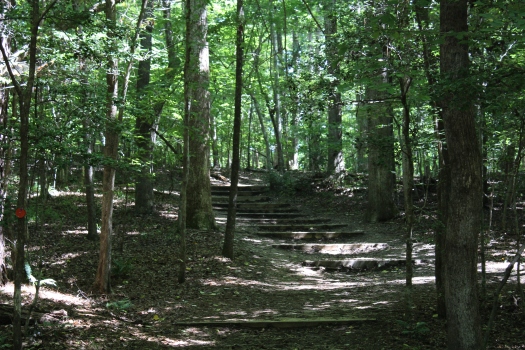 I have no idea how far we got when we came to THE stairs. I put ‘the’ in capitals because if you ever take this loop you will know what I am talking about when you get there. There were hundreds of wooden stairs that were barely wide enough to fit two people side-by-side. I made the decision to abandon the stroller at the top and carry all of our stuff down, including my son.

this is a photo from the bottom of the stairs. it winds way up into the trees, further than you can see.

Once we made it to the bottom I was in awe of what we saw. Giant rocks that jutted out so far you could sit under them and instantly reminded me of when I lived in Colorado as a child. The Cape Fear River was shining in the sunlight and was so incredibly clear we could see straight to the bottom. I was pleasantly surprised at how beautiful this little treasure was and a bit upset I had never been before. We hiked along the trail and chose a clearing overlooking the water to set up our picnic. We enjoyed our lunch along the river bank while watching people take a dip in the water. 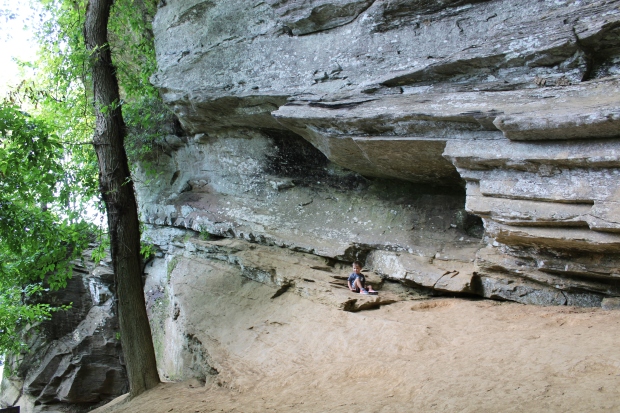 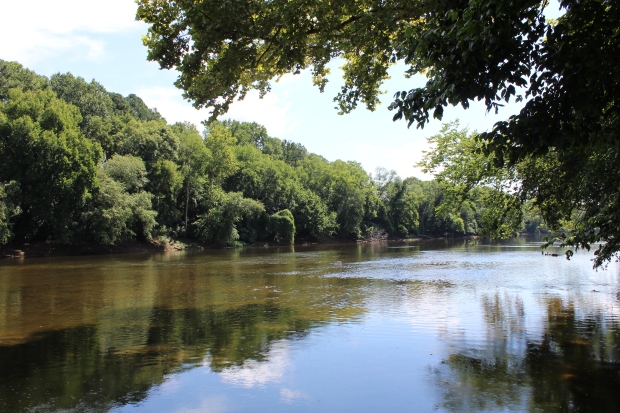 The way back was definitely more difficult than the way down, since it was mostly uphill and I had to push/pull the stroller. Again, my son decided he wanted to hike by himself so I was able to pull the stroller behind me for half the way which made going up the steps easier. He even helped me pull it at one point which was super sweet of him. He was probably doing it out of concern due to how hard I was breathing. We also had a “friend” cross our path during our trek back!

Near the parking lot, there is a covered bench area that would be great for a big group to picnic together or even an event. There is also a kid-friendly trail that has a self-guided adventure using various brochures depending on which aspect you want to focus on (i.e. trees, ferns, etc). Raven Rock State Park also offers camping and fishing.

Next time I visit I am going to take my husband so we can truly hike and maybe even take a dip in the river. I believe there is a place further up the river where you can rent kayaks and canoes. I will be sure to do a second blog post after my next visit!

You can find out the address and more information about Raven Rock State Park here.

Mutterings of a Household CEO

Mutterings of a Household CEO